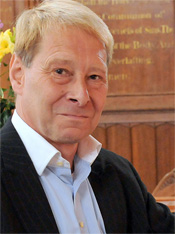 James Parsons, for many years a familiar face in music and organ education, is one of the organ's most articulate advocates.

Recently Head of Student Development at the Royal College of Organists, he is recognised as a distinguished international concert organist, and as one of the UK's foremost organ teachers.

As Organist, then Director of Music, at Oundle School, he was for twenty-five years Founder-Director of Oundle for Organists, hosted by Oundle International Festival (which he launched in 1985). James has enjoyed the privilege of opening doors for hundreds of young organists through Oundle's and RCO's inspirational courses.

James is known too for his international career as a concert organist and recording artist. His recital engagements throughout the British Isles, and tours to France, Holland, Germany, Scandinavia, USA, Czech Republic, Iceland, Russia, Australia and South Africa have received enthusiastic critical acclaim. Last September he played recitals and taught Conservatoire students in St Petersburg. Earlier, he had spent ten days in Lagos, Nigeria, to play a concert and front an organ-school at the Anglican Cathedral.

Born in Birmingham, UK, James owes many years of formative experience to George Miles, esteemed organist and 'maker-of-organists'. James proceeded to the Parry-Wood Organ Scholarship at Exeter College, Oxford, and to post-graduate study at the Royal Academy of Music--with Ralph Downes and Geraint Jones. Further study with Jacques van Oortmerssen shaped his interpretation of Baroque repertoire.

Between 1976 and 1998, when he taught at Oundle School, James played a key role in the School's acquiring an iconic Danish-built organ. Later, through Northamptonshire Village Churches Organs Project, he has enabled and influenced the restoration and installation of six fine pipe organs in Northamptonshire country churches. Further, in 2013 he instigated the relocation of the Nigel Church organ of St Mary's RC Cathedral, Newcastle to Poplar in East London.

James is a Tutor at the Royal Birmingham Conservatoire, Organist of historic Fotheringhay Church in Northamptonshire, and a Vice-President of The Organ Club; he serves on the Examiners' Panel of the Royal College of Organists, and was the first Education Editor for Organists' Review magazine. As an RCO-accredited teacher, he meets his students in London, mid-Wales, Northamptonshire and Newcastle; his privilege has twice been to front the Sydney Summer Organ Academy.

Married to Hilary, James lives in rural Wales, loves driving his signal-red 1972 Triumph sports car, and has just taken up a new appointment as the devoted servant of Mister Morgan, the adolescent Afghan Hound.